I don’t even know where to start….

I probably should explain that Joplin is one of my hometowns.  It has been 13 years since I moved away but I still consider it my childhood home since I spent the majority of my childhood there (yes, this avid Jayhawker lived in Missouri for several years).  I moved there right before I turned 8 years old after living in two towns and lived there for about 7 years.

When I first moved to Joplin I was the new kid on the block but I will never forget how welcoming my classmates were.  By the end of 3rd grade a few of them could sign fluently enough that they would occasionally interpret for me when an interpreter was not present and they would interpret at their churches for deaf adults.  By the time we were in middle school they were “employed” by the local YMCA to interpret my gymnastics classes.  They always went above and beyond to make me feel included.

Even though it was a struggle going through the school system due to the system not having experience with a deaf student, my friends and classmates always had my back.  They would stand up for me even if it meant getting into trouble with teachers.

Joplin is more than a town, it’s a family.

Joplin also taught me the importance of friends and family versus material things.  People didn’t care what I wore, what kind of house I lived in, or where my parents worked.  Joplin has been one of the few communities I’ve lived in where I felt like if something happened they would be there for me.  Which is what makes it so hard being 2.5 hours away from Joplin and not being able to help out (they’re turning away volunteers since they have too many at this time).

I’m so thankful all my close friends and their families are okay.  I was worried for a few hours but thanks to Facebook I found out they were okay.  There are still a couple of classmates I haven’t heard anything about yet.  Most of my friends have lost their homes.  I have seen pictures of their homes and it’s amazing they survived.

At least a third of Joplin has been wiped out.  The third that the tornado hit is where I basically grew up at.  I’m pretty sure my old neighborhood is mostly gone.  My old house was 0.5 miles from the hospital that was hit.  There used to be a gas station across the street that I used to ride my bike to.  There also used to be a park and swimming pool nearby the hospital where I took swimming lessons at and walked to in the summer once I was old enough.  When looking at pictures online,there’s no sign that there was even a gas station, a pool, or a park.

I visited a few friends in Joplin earlier this year and got there early enough to drive around a little bit.  Boy, did that bring back some memories I forgot I had.  Now it almost feels like those memories are gone.

The neighborhoods I used to hang out in after school with friends….

My friend’s houses where I spent many hours playing and having slumber parties….

The CiCis where I felt so grown up when I got to walk there with a friend in 4th grade by ourselves….

It just breaks my heart to see all this devastation and knowing that so many people no longer have a home.  I’m so thankful my close friends are okay.

They’ve always been more than just friends.  All I want to do is hug them, give them food, and a place to sleep.

Joplin as I knew it is unrecognizable.  I know that the people of Joplin will pull together and will help each other out.

Joplin was hit by a severe thunderstorm yesterday and may end up having potential tornado producing weather today.  Many people are still missing.  Please keep Joplin in your thoughts, the people of Joplin can use all the help they can get for many months to come.

This is a somber reminder to not take people you care about for granted, to not go to bed angry, to let go of the past, and to live in the moment. 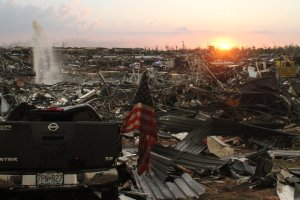 I am back to doing aural rehab once again.

I’m still doing closed set lists (picking out the correct word out of 4 word sets).  Today, I got the highest score I have ever gotten on the AB program which was 84%.

I generally get around 80-90% on closed set words that have different syllables (the Cochlear computer program) but lately I have been focusing on the Advanced Bionics (AB) computer program because it’s more challenging (e.g. same number of syllables, similar initial sounds, etc).  With the AB program I generally get around 65-75%.  This is in a quiet setting with very clear speech.

I had mixed feelings about it.

At first, I was excited because until today the highest score I had was around 75%.  Then it kind of bothered me that after 2 years I’m still on closed set list and I have yet to get a 90% using the AB program

It’s a slowwww process.  It doesn’t help that my exposure to hearing people is limited since I work from home and I interact mostly with deaf people who sign.

Just one of those moments where I’m not sure if I should be excited or disappointed.  Eh, I think I’m going to find a middle ground and be pleased that I’m continuing to make process even though it’s slow….and cross my fingers that this 84% wasn’t a fluke.  🙂

I feel better about my decision to restart P90X after today’s physical therapy session.  I was told the other day to avoid doing lunges and squats so I didn’t ask anything about it.

So, I was diagnosed with Osteoarthritis in my left knee a few weeks ago and it appears I’m starting to get it in my right knee also.  I went to the physical therapist on Wednesday who gave me a few exercises to do.  She also pointed out that my left arch is collapsing and suggested to buy some padding for my shoes.  My left hamstring is also really tight.

Looking back, I’m sure I had all of these issues growing up.  I just never realized when I asked others if their knees hurt or feet hurt that the type of pain I was experiencing was different.  What I learned on Wednesday sure explains a lot of what I’ve experienced over the years.

Thankfully I haven’t experienced any extreme pain or limitations at this point.

My physical therapist also suggested that I avoid doing lunges and squats.  My orthopedist said that I do not have any restrictions and I can do whatever I want as long as I can manage the pain.  He did mention that the more I do now the quicker things will progress however the outcome will be the same (possibly cortisone shots and surgery down the road).

It’s a conflicting situation to be in.  Do I continue to do what I want to do now and possibly face shots/surgery in a shorter period of time or do I give up some of my goals now and put off shots/surgery?

I keep trying to figure out how to come up with a good workout routine that will allow me to meet some goals I have had for a couple of years yet will allow me to take care of my joints.  After thinking about it, lunges and squats have never bothered me.  The less I focus on the lower body the more I notice having pain.  It seems like exercise is something that does help me and I need to find a balance between babying my knee and continuing to exercise.

I am going to continue with what was my daily routine of working out a few months ago even though it includes lunges, running, and squats (even though my PT would not be thrilled with that idea, my orthopedist has not give me any restrictions).  I am not even at the point where I have to take painkillers before every single workout even though it has been suggested by my orthopedist to do.  I think once I meet a few goals that I have been wanting to meet that I will be satisfied with modifying my workouts this fall and I wont be tempted to keep trying at a point in my life when my knee might have more issues.

Of course I plan on listening to my body.  If for some reason my knees just seem to give me a lot of problems I will simply avoid those specific lunges or squats that day.  No reason to push myself to the point where I fall apart even more.

So, this summer will be the time to meet some goals I have put off for a couple of years and to close that chapter.  I have promised myself I will listen to my body and I will know my limitations.

I posted a few days ago that I have a goal of working out for 90 days and will blog  about it every once in a while.

It’s crazy how not working out for a month or even a couple of weeks makes a difference.  I  struggled with yoga today.  Am s.o.r.e!  Sometimes I think the 3rd-5th days are the worst even compared to the first day of any workout plan.

I have a few blog posts in my mind that I’ll type up when I have more time.

In the meantime here’s a brief update and a few pictures.

We lost one of our sand volleyball games and won 2 games on Friday.  Gretchen, Marie, Dennis, and I went out to eat afterwards.  Saturday morning, I went to a Discover Scuba Diving class before volunteering at 2 sites and got to babysit a cutie pie!  Easter Sunday, I had dinner with my parents and Dennis.  We hung out in the backyard a bit and went geocaching.

Sand volleyball was fun even though we lost all 3 games on Friday.  We played really well and came pretty doggone close to winning those games!  Went out to eat with Devon and Dennis afterwards before meeting up with Morgan and Michael.  Dennis and I headed off to a Midnight Run 5K that started at 11:59pm and bumped into someone I do gymnastics with.  I started off Saturday morning with some delicious chocolate pancakes before volunteering at 2 places….I was wiped so I just stayed in Saturday evening to get some work done.  This morning, I met up with Dennis and John to go geocaching before volunteering.  Ended today with a home cooked meal…yum!

Pictures from the past week or so in no particular order.

Have a great week!  Maybe I’ll have some extra time to type up a real post!  🙂