I have gotten really bad about not working out and munching on never-ending chocolate.  I’m not the kind of person who is going to give up food that I love, I believe you’re setting up yourself for failure if you go to that extreme.  It’s okay to eat what you want but in moderation.  It’s also important to try and replace “bad” food with “healthy” food when possible  but don’t deny your cravings.

I feel so much better when I workout.  I feel healthier, I have more energy, and my body doesn’t pop as much.

I have challenged myself to workout for 90 days and will be loosely following Tony’s P90X workout schedule once again.  A few workout sessions (e.g. Kenpo) will be tossed out and replaced with an hour walk/run.

P.S. There’s a new P90X program coming out later this year and let’s just say the term “plyocide” is a bit scary sounding.

So, my left knee has a history!

I remember being in high school and dreading block days (days when each classes were an hour and half) because that meant I had to sit the whole time with my knees bent (little did I know I would eventually deal with this again during 3 hours long graduate classes).  I would oftentimes end up slouching because sitting with my knees bent would hurt after a while.  I continued to have this issue when traveling in cars, buses, and airplanes.   It was my “norm” so I didn’t question it much and when I mentioned it…no one really had any suggestions as to what I could do about it.

I had another fall when I was about 24.  I was on a ladder changing a light bulb on the house when without any warning the ladder slid off the house.  I landed on both knees once again.  My left knee hit the driveway and right knee hit the grass.  It only took a few weeks for my knee to heal that time.

A year after that fall, I went on a hiking trip where I ended up hiking a 14Ker with a loose kneecap.  Each step hurt but it was so WORTH it.  After that trip I got my knees checked out and was told I could continue with whatever activities I wanted since it wouldn’t do that much more damage.  I was also told that it was likely due to doing sports especially gymnastics as a child.

For about a year, I finally got a break from my knee bothering me until about 6 months ago.  It started bothering me again whenever I would run.  My left knee would pop for days afterwards which would cause some pain.  My kneecap also felt out-of-place at times.

Last week I kept hearing something and kept thinking it sounded like firework.  Turns out it was my knee popping!

I was able to go to the orthopedic office today to get my knee checked out.  I wasn’t really told anything new but did have a few things confirmed.  Basically the cartilage around my kneecap is wearing down causing the bones to grind against each other.  There’s no treatment for it.  I can try to treat the symptoms with Ibuprofen, ice, cortisone shots, and physical therapy.  I opted out of the cortisone shots today and decided to try the Ibuprofen and physical therapy first.

I was told that I can continue to run but I may want to eventually find something to replace running if I can’t manage the symptoms well.

I did ask about long-term impacts that running might have if I continue to run.  Basically, I will still have the same outcome but running may cause the cartilage to wear down quicker.

He did say that at some point down the road I may want to consider a MRI but then he remembered I have a CI (kudos to him for knowing that I can’t have MRIs) so some additional studies might be needed down the road which could eventually lead to surgery.  It’ll depend on how well I can manage the symptoms.

Here are some X-rays for you science/medicine geeks!  If you look closely you can see where the bone/cartilage has worn down a bit on my left knee (left knee is on the right side in the close up photo).

I haven’t officially been diagnosed with Osteoarthritis per sec even thought that’s the reason for physical therapy referral. Apparently I’m really close to having arthritis in my left knee.

The vibe I got was that I can continue to do what I want as long as I can manage the symptoms. Also to keep in mind that what I do now could speed up the future outcome.

For now, I’m going to continue to walk/run while taking Ibuprofen (I’m not a fan of taking painkillers and will only take them when I absolutely have to) and icing my knee down as suggested but will cut down the number of days that I do cardio workouts.   Am also going to see if physical therapy makes any difference. The point of physical therapy will be to strengthen certain muscles to try to reduce the work that my knee has to do. Then I will decide what to do after that.

This is a common problem so if any of you have this….let me know how you’ve found ways to manage it!

I get excited when I see sunsets that turns the sky pink.

I’m always amazed at how different the sky looks everyday.

When I step outside in the evenings I hope to see a sky full of stars and the man in the moon.

I see the sun, clouds, the moon, and stars on a daily basis….but their beauty always captures me. It never gets old.

I hope to see the Northern Lights one day…..

Weekends sure keep me busy!

It was great catching up with Morgan, Rusty, lil’ Dylan, Tara, and Chris Friday night.

Saturday was a blast even though it wore me out.  I started the morning with a 5K run.  It was COLD.  I learned my lesson from the last 5K run and bought some gloves along.  It was about 39 degrees and was so windy that the wind chill was around 28 degrees.   I ended up walking half of it so my time was around 34-35 minutes (doggone knee).  Dennis did great especially without any training!!

Shawn also ran his first official half-marathon!  I need to start training so I can keep up with Shawn and Andrea.  🙂

The Oz Run had a fun and local feel to it.  It went right past my high school which bought back some good memories.  The races were called:  The Dorothy Dash 5K, Wickedly Fast Half Marathon, and The Oz Marathon.

I bumped into a teacher I volunteered with for several years and the mother of a child I used to volunteer with.  Was a fun surprise!

There was a group of people who were dressed up as Dorothy, the Lion, the Scarecrow, and the Tin Man which made for a fun atmosphere.  A couple also got married right before the 5K started.  I passed the bride a couple of times and she was in white running clothes with a veil…she also had red shoes on.

After the 5K I headed home to get ready for the rest of the day which consisted of bowling with my parents for my mom’s birthday, HLAA social movie, eating dinner at the Plaza (with Dennis, Devon, Lucy, and Anna), and attending a PartyLite Party at Gretchen’s.

Today was my mom’s official birthday so we grilled dinner, ate cheesecake from the Cheesecake Factory, and had gifts!

I’ll have to remember to blog soon about what I’m currently doing as a volunteer…am enjoying the challenge and meeting new people!  Oh, yeah….sand volleyball is now in full swing!

Also signed up for Aerial Fitness classes with Samantha and Jessika.  Am way excited about those classes!  More on that later also.

Am signing off for now but here are a few pictures.  Have a great week! 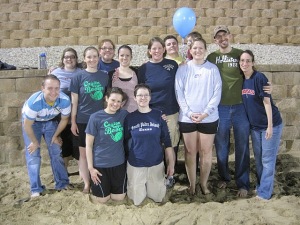 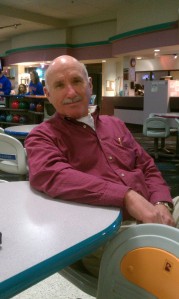 Today was a slow-paced, relaxing, and FUN Saturday!

I joined 6,399 local runners in the Rock the Parkway Race this morning.  I did the 5K since my knee still isn’t up to par….at least this time I didn’t have to pop it back into place like I did after last week’s race (yeahhh, am going to make an appointment this week).  Andrea ran her first half-marathon and did awesome (just under 2 hours)!

It was in the 30s when I woke up and was about 40 when the race started.  The sunshine warmed up things pretty quickly and it got up to 70 degrees in the afternoon.

After the race, I was able to get a couple of things done and ran a few errands before lunch.  After lunch and ice cream (yum!), Dennis and I headed to the Plaza for the National Pillow Fight Day with random strangers. Good times were had. 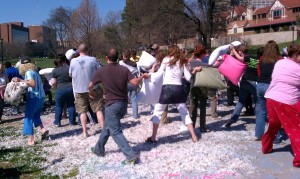 I spent the rest of the afternoon laying on a blanket outside reading and napping. It was such a beautiful afternoon!

Am just trying to get a bit organized around here so that I’m ready for the upcoming week! Am looking forward to the first sand volleyball practice of the year tomorrow and to finalize some traveling plans.

Ever have one of those days when you can’t seem to stop asking questions and you want an answer for everything?   🙂