I spent the first 6 weeks of training with my first host family.

One weekend my host mama wasn’t feeling well and she asked me to help out a bit more with household chores so she could rest.  Then that Sunday night/Monday morning she woke me up at 4 am.

It took me a while to understand what she was saying.  Mind you she was signing in KSL, I didn’t have my glasses on, it was 4 am, and I was trying to read her signs through a mosquito net.  I finally figured out she was trying to tell me that she was going to the hospital and wanted me to watch her son (my little brother) who was still asleep.  She returned about an hour later after getting a shot at the hospital and said she felt better.

I left for training at around 7:30 am and then a couple of hours later I was told to go home and pack a backpack for a few days.  Turns out my host mama had to go to Nairobi to see a doctor and I was to stay at a hotel.

Turns out she had to have surgery the following Monday in Nairobi so I ended up staying at the hotel for a week.  The following week us Deaf Education group went to Loitokitok for HIV training with the Science and Math Education group.

After we got back to our training site I was told to go back to the hotel.  A couple of days later it was decided that my host mama still needed time to recover and that I would spend the last week and half with another host family.  I basically had to pack everything up in 20 minutes and move to my new host family.

It was nice finally having access to all of my stuff after a few weeks!

The second host family had hosted the PCT from our group who had to return to America since her dad’s battle with cancer wasn’t going well and they also hosted a PCT last year who was hard-of-hearing.

They were so welcoming and made sure I felt a part of the family.  They taught me how to make chapati and how to milk a cow.  They tried to learn some sign language and communicated with me through writing. 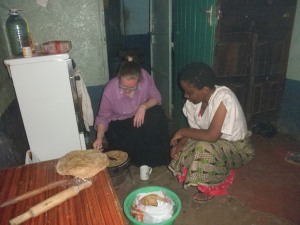 One of the final steps towards becoming a Peace Corps Volunteer is passing the LPI with an Intermediate Low.  We had a mock LPI a couple of weeks before the actual exam.  I think only 2 PCTs passed the mock LPI (I was not one of those 2–most of us got “survivor skills”) and both PCTs weren’t fluent in ASL.  It was difficult trying to switch from ASL to KSL.  If you use ASL signs, it lowers your score.  It’s kind of hard to try to keep those languages separate.

My signing skills have been criticized since I was a small child because I’m not culturally Deaf and SEE2 was my first language.  For that reason being evaluated on my signing skills for 10 weeks bought back a lot of negative memories and reminded me why I am sometimes slow to make the first step when it comes to communicating with someone (am working on that).

I was extremely nervous about this exam.  So nervous that I actually stopped wearing my CIs to training sessions because I wanted to focus on signing only.  Mind you, it was a difficult decision to make.  I knew I would take many, many, many steps backwards going without my CIs (and am paying the price big time for that right now) for a few weeks.  Again, I could not give them up entirely.  I usually got an hour or two to myself in the evenings after dinner with my host family and the first thing I always did was put my CIs back on and listen to music.

I tend to sign more English, I tend to rely on lip-reading, and I get distracted by sounds with my CIs.  I noticed a difference in my ability to pick up KSL in a noisy world vs a silent world.

I had heard a few horror stories about how some previous PCTs failed the LPI twice (you get two tries) and were sent home.  If you fail once you’re on prohibition.

I knew hearing was affecting my ability to pick up KSL.

It was probably one of the hardest decisions I had to make in a long time.  I’m trying to make up for it by doing some aural rehab on my netbook and by listening to audio books as I read along on my Kindle.  I’m so glad I didn’t go without my CIs 100% and am glad I did try to find a balance through listening to music in the evenings.

It was very conflicting.  I had to choose between 2 ultimate life-long goals.  Goal #1:  Getting used to being bilateral and improving my lip-reading ability.  Goal #2:  Becoming a Peace Corps Volunteer

I kept trying to tell myself I wasn’t necessarily choosing one over the other (but it sure felt like it and that was hard to deal with)…rather I was focusing on one goal for a short period of time and that I would eventually return to focusing on both goals.

Oh, by the way…I scored an “advanced” on my LPI!  Only a few of us got above Intermediate….I was one of those few!  🙂

During week #8 of training we had our model school week.  Basically around 40-50 kids stayed an extra week after everyone else went home for winter break.  These kids were in classes 4, 5, and 6.  We were basically thrown into the whole “ok, teach now” thing even though most of us have never taught before.

Some Peace Corps Volunteers came to observe us and give us feedback.  We also had fellow PC trainees observe us.  I think the whole observation thing is what freaked me out more than anything else even though it ended up being helpful.

The first few days I taught…I had no idea what I was doing.  It was kind of hard being thrown into it all not knowing what the kids knew and what they didn’t.  I also had to pack and move to my 2nd host family’s home in the middle of model school week.  That was very stressful but once I got settled into my 2nd home things went a bit better with model school.

This is what I taught during model school:

We also had to spend one night at the school for the deaf and socialize with the children.  It was a good experience.  I shared stories with the children about how it snows in America and how we have snow days.

The night that I spent in the dorms was also the night they had a bonfire.  Some of the PCVs bought ingredients to make s’mores.  It was so much fun seeing the children’s and the cooks’ (we invited them after dinner) reactions.  They had never seen or heard of s’mores and most of them had never ate marshmallows!

-HIV and the Youth in Kenya

-Round Robbins (more on that later)

-Week #8 was our model school (more on that later)

-We had our final LPI (Language Proficiency Interview) during week #9

-How to write trimester and monthly reports

-Met our headmasters.  My headmaster couldn’t come so a teacher from my school came instead.

I have been blogging about my Peace Corps experience on a different blog which was originally a private blog which I later changed to public.

I have found it a bit tricky to maintain two different blogs because my life is not that organized…my life is one big tangle and every part of my life interacts with each other…no reason to try to keep it all separated into nice little pretty piles online.

I have imported all of my posts from my other blog to this blog…which turned 3 years old last month!

I have been neglecting my blogs for about 6 weeks so I have some catch-up posts to make!