Bear with me as I try to get all caught up with my posts in as few posts as I possibly can.

The Deaf Education group traveled to Loitokitok for HIV/AIDS training with the Math and Science PCT group.  I fell in love with Loitokitok!  I saw a few Maasi tribe members walking around town.  Maasi oftentimes wear red and blue plaid clothes so of course every time I saw them…I thought of KU!

I was in awe of Mount Kilimanjaro (highest peak in Africa at 19,341 feet).   It was a bit chilly, very rainy, and very muddy!  I loved our walk from the training hub to the hotel…I even got to see a double rainbow one early evening!  We were also treated to some African music and dancing after our training session one day.

Credit for this photo goes to http://www.csupomona.edu/~rrreese/nonfla/Tanzania.html

During our week in Loitokitok we had one day where we did Round Robbins to basically show that we can survive on our own once we complete training.  We had an exam which contained of us writing lesson plans and schemes.  Then we had to identify Kenyan food in either KSL or Kiswahili and explain how to cook a Kenyan dish.  We also had to light a paraffin lantern (we lose electricity a lot and some PCVs don’t have electricity at all).  Then we had to show that we knew what to do in different situations (people selling stuff at the market, people following you, busy matatu/bus station, bars, intoxicated people)…the trainers were excellent actors.

We celebrated Thanksgiving in Loitokitok on Friday (the day that the PC gave us off).  The Math and Science Education group did a great job planning a grand feast for all 27 of us!  They even managed to find 2 turkeys (hard to do in Kenya)…mind you…live turkeys.  Two of the Math and Science Education PCTs killed the turkeys in front of us.  I have never seen an animal being killed so that was an interesting experience.

We had a bonfire after our Thanksgiving dinner. 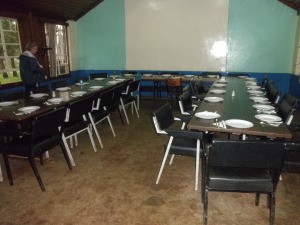 It was about a 30 minute walk one way from my 2nd host family house to where we had training at.  I had to pass through the matatu/bus stage which wasn’t my favorite part of town.  People tend to grab your arm or get really close to you and try to get you to buy stuff.

Anyways, I was walking home one day and was almost home when I saw a relative of the 2nd host family that I had just met the previous night run up to a matatu.  He waved at me and there was another man near him who I assumed he knew.  This man stuck his hand out to me and I thought I was supposed to know him.  Before I realized I didn’t know him I had already made the mistake of shaking his hand.

He would NOT let go of my hand.  I had to jerk my arm pretty hard to finally get him to let go after a couple of minutes.  Then he started following me home rambling on and on not caring that I couldn’t hear a word he was saying.  I just ignored him and was glad I made it home okay!

My new favorite African animal are giraffes.  There’s something about seeing them in their natural habitat.  I have seen several on the side of the road while traveling through Kenya.  Sometimes I see a family of giraffes and sometimes I see them eating from trees.  Once I saw one running near the road (maybe 20 feet from our matatu)…they’re slow runners but  they’re graceful.

I have also seen zebras and monkeys!  I haven’t seen any elephants yet.