As you know I went on a camping/hiking trip to Colorado in June/July. A week or two later I got sick. Sick enough that I actually called my family doctor which is something I’ve never done before. My doctor couldn’t figure it out and set me on my merry way with antibiotics that made my face swell like a puff fish. I wasn’t getting any better and went in again to see my doctor a week later. I basically started self-diagnosing myself. I pointed out a few things she ignored the first time and made a couple of suggestions. I also asked to be tested for Lyme disease since I had been in Colorado for a while.

A few days later, a nurse called me with my lab results. We figured out what I had and she said the Lyme disease test results were negative.

I got better fairly quickly after that and forgot about the Lyme thing.

A couple of weeks later I get a phone call out of the blue from another nurse saying I had Lyme disease. They said they would make me an appointment with a specialist.

I hung up and of course I get online to start researching Lyme disease. I was already pretty familiar with how serious this disease can get. I was trying not to freak out because a month had already gone by. Time is pretty important for something like this. The earlier you get treated the less likely you’ll get the life-long nasty stuff Lyme disease can cause.

A week goes by and I hadn’t heard back as to if an appointment had been scheduled so I called the doctor’s office again. They apparently decided to make an appointment with a different specialist instead and told me to call back in a week. I also tried to get them to clarify the whole lab test results. One nurse said there was some confusion and another one said the test was pending when they originally told me it was negative.

Well erhmm…shouldn’t you have told me it was pending instead of making an assumption?

I called back in a few days insisting I get an appointment asap because of the whole time thing.

They finally scheduled me an appointment for 3 weeks later. There was no way I could get in any sooner. The appointment was yesterday (it was actually supposed to be the 14th but they had a last minute opening).

So, I went to the appointment with the infectious disease specialist that happened to be in the senior clinic at a hospital. I felt a bit….out of place there.

It never fails.
1) It took 5 minutes for the nurse to understand that I was deaf and NOT the interpreter. Not sure why she was so confused.
2) I had to explain that I was pretty sure I was born deaf and it wasn’t due to Lyme disease…because yeah…I have never been able to hear.
3) I got called a deaf-mute. C’mon…it’s 2009…get with the times and be a bit more politically correct please. Deaf-mute is an offensive term, but I ignored it. I did give him credit for not calling me deaf-dumb.

Overall, the staff was nice and didn’t brush my concerns off like some medical professionals do when they realize I’m deaf.

Back to the Lyme disease. At this point it’s been more than 2 months and I’m a bit ticked (no pun intended…well maybe…lol) it’s taken this long. I’ve just been really concerned about getting access to treatment in time.

Turns out, the infectious specialist doesn’t think I have Lyme disease. He thinks there was just some confusion in interpreting the lab results. He did draw 4 tubes of blood to retest and I should find out Monday for sure. Hopefully this whole thing will come to an end Monday.

I feel like yet another victim of miscommunication and lab test confusion within the medicine world.

So….this may not sound like a blog worthy topic to post….but here goes!

I have noticed many people blog about their “CI Moments.” Their CI moments are generally different from mine. Their moments usually has to do with understanding speech without lipreading. Mine has to do with environmental sounds or music.

Just thought I might start doing the “CI Moment” thing here and there just to give people an idea of what I can hear and understand. I know people are curious because they ask from time to time what I can hear with the CI. 🙂

A couple of days I was upstairs heading towards the bathroom to get ready for sand volleyball practice and I kept hearing something. After a few seconds I figured out it was coming from downstairs and that it was someone hitting a spoon on the side of a dish. Not only was I able to hear that from upstairs, I was able to identify the sound.

Since when does shoelaces make a sound while tying your shoes? It even sounds different when the laces hit the floor vs rubbing against the shoe while tying them. Enuf said… 😉

Some days sound better than others.

Is it the same for hearing people?

Things sound clearer and crisper on some days. Other days, things sound really fuzzy and muffled.

Today definitely sounds better than yesterday did. Of course it’s days like these that I keep getting sidetracked with music and exploring sounds…when…I should be more productive doing other things. 😉 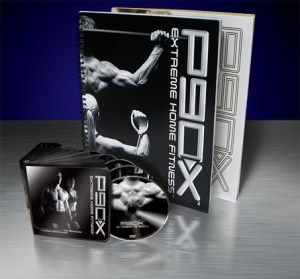 I don’t know if any of you stay up super late and have seen those P90X infomercials?

It’s basically a workout program (an intense one). A friend, Seth, purchased the 12 DVDs and he has been doing it for a while now. I was curious about this program (yeah, yeah….infomercials do work).

I gave it a try last Monday with Seth and Dennis. Seth decided to mix things up by having us do the abs (15 min) and plyometrics (1 hour). The plyometrics was tough but good. Reminded me of sports camp conditioning but without coaches screaming. I was sore for a couple of days afterwards.

We have decided to try and make this a weekly thing. You’re supposed to do P90X everyday or almost everyday. Instead, a bunch of us are going to get together once or twice a week to do this together. It’s just a lot more enjoyable and easier to workout with friends than by yourself.

Tonight will be round 2! This time it will be abs again combined with an hour and half (?!?!?) of yoga. Chris will be joining Seth, Dennis, and myself tonight.

I will admit….yoga….for an hour and half just doesn’t sound like my thing. This could be interesting. I have a feeling I’m going to have to stifle back a few giggles when I see all of us trying to do various yoga positions, such as, the tree!

There have been some ongoing discussions among fellow deaf buddies about music. It made me think about how music has played a role in my life growing up even though I’m profoundly deaf. I’m going to break this post up into a few posts over the next few weeks instead of making a super duper long post.

Some of my earliest memories actually involve music. My parents have had a piano in our house for as long as I can remember. I remember hitting the keys and loving how it felt.

My parents also had a record player. I used to try and “listen” to music with headphones.

Rockin‘ with My Little Pony (not sure what’s up with the half-shirt)…..

I knew the words to a few songs (thanks to my mom) when I was about 3-4 years old and would always sign them (I can’t sing even if my life depended on it). My favorite song was Twinkle, Twinkle, Little Star. Apparently my preschool teacher (deaf preschool classroom) was surprised I knew the words to The Alphabet Song.

I loved music class in early elementary school. The music teacher would always let me play with instruments instead of having to sing the songs. I remember once or twice, when we had after-school activities, I would sneak into the music room and try to figure out a way to play the instruments quietly without getting caught.

I actually owned a mini keyboard, harmonica, and recorder. I didn’t really listen to those instruments. I would just play random notes without hearing aids on. I just enjoyed feeling the music. My poor parents….that had to be annoying. 🙂

I hated music classes in upper elementary school (3rd-5th grades). My music teacher those years focused only on singing songs. I was expected to sit quietly without saying anything during the whole class. That didn’t always happen. I would sometimes end up looking through the song book and memorize the words to various songs. Or I would convince my friends (all my friends at that time were hearing) to break out into songs that had hand/arm movements to go with it when they were supposed to be singing something else. This Land is Your Land was a favorite of ours.

Some of my favorite PE classes in early elementary school were learning various dances.

I did participate in a few school music shows. Christmas shows. Girl Scouts. Sock Hop. The Sock Hop was pretty fun. My friends put together dance skits to try out for the show and I ended up being in 2 or 3 of them. Good times!

I’m in the front row wearing a white dress complete with a red ribbon. You can tell I’m in the middle of signing a song.

I’m in the front row wearing a white sweater. 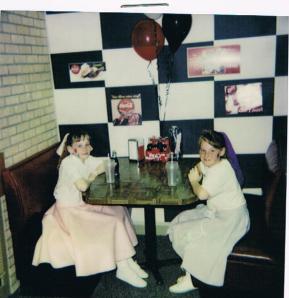 I also did gymnastics on and off between the ages of 3-15. Music is definitely a part of gymnastics. I had to memorize floor routines so that I knew the timing of the music even though I couldn’t hear or feel the music as I was doing my routine. I remember my first gymnastic recital when I was 5. I depended on other kids to follow the music. I remember I couldn’t understand why everyone seemed to get out of sync when they could hear the music. I wasn’t sure which kid to follow. 🙂 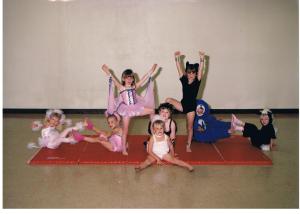 I’m standing in the middle in all pink (was supposed to be a butterfly)
The point I’m trying to make is a person doesn’t necessary have to be able to HEAR to enjoy music. There are other ways to enjoy it.